Review: "Strands of Bronze and Gold" by Jane Nickerson 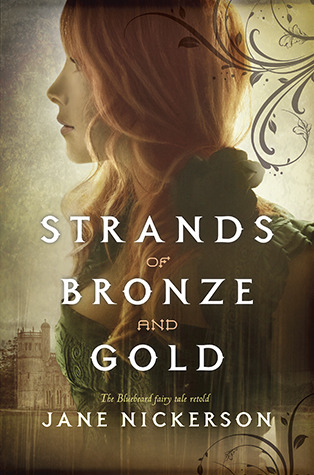 Title: Strands of Bronze and Gold

When seventeen-year-old Sophia Petheram’s beloved father dies, she receives an unexpected letter. An invitation—on fine ivory paper, in bold black handwriting—from the mysterious Monsieur Bernard de Cressac, her godfather. With no money and fewer options, Sophie accepts, leaving her humble childhood home for the astonishingly lavish Wyndriven Abbey, in the heart of Mississippi.

Sophie has always longed for a comfortable life, and she finds herself both attracted to and shocked by the charm and easy manners of her overgenerous guardian. But as she begins to piece together the mystery of his past, it’s as if, thread by thread, a silken net is tightening around her. And as she gathers stories and catches whispers of his former wives—all with hair as red as her own—in the forgotten corners of the abbey, Sophie knows she’s trapped in the passion and danger of de Cressac’s intoxicating world.

Glowing strands of romance, mystery, and suspense are woven into this breathtaking debut—a thrilling retelling of the “Bluebeard” fairy tale.


Readable/Nothing Special
Wasn't impressed with this one. Writing not bad at all, but the story was BLAH and I felt nothing for the main character. With the lack of magic/fate themes and a tilt more towards historical realism it makes zero sense that Bluebeard would actively devote himself to an infant her entire life (before he went batshit crazy) just so he'd have a backup marriage plan IN CASE he DID perchance become a delusional, emotionally dysfunctional serial killer and lose all 4 previous red-headed wives to his psychotic proclivities. Because who doesn't prepare for that possibility in life?

In this particular telling, Bluebeard is suffering from some unidentified emotional malfunction which could probably be properly diagnosed and medicated today, but back in the 1800s was just "peculiar male behavior" that could be controlled by a doting and clever wifey. Interesting concept. Downside? Random ghosts. Ghosts of ex wives who appear occasionally but don't actually do anything to help. They're just around to alert Sophie that something is wrong. I feel like the ghosts could have been left out since there were no other solid paranormal/supernatural elements available in the story.

The author tried to light Bluebeard's behavior as erratic and unpredictable so that it would be harder for Sophie (and the reader) to decipher whether he was a "Beast" or a "hurt child", but it was pretty clear that he was 99% of the time a raging beasty lunatic and only %1 of the time a semi-functioning person with the clarity to behave with some human decency. In general I think the idea was for the reader to feel unsure about Bluebeard... to maybe even feel some sort of sympathy for him because of his obvious disorder. Nope. No sympathy here. That man is cray cray, and it's obvious from the second we find out he's been doting on a little girl from a distance since she was 5 so he could turn her into the "perfect woman" just because her hair was red.

And of course Bluebeard had to be DEVASTATINGLY handsome or his sexually aggressive nature wouldn't fly. Sophie also had to be completely demure and decidedly prudish or she would have ended up in the sack with him on account of his pretty face and THEN where would the story be? Probably not in YA.

Sophie would have surely ran away screaming from that abbey the first night if Bluebeard had been an "average looking" sexually aggressive and emotionally unstable 40 year old man. But nope... his face is really nice, so that makes up for his really odd, suspicious, and crappy behavior the first half of the book.

In general I think there was a good idea here, and the writing was great, but the story itself fell too flat for various reasons, including underdeveloped sub-plots (The underground railroad idea was awesome. Wanted more of that).

All of the secondary characters were way more loveable and interesting that the main ones. I wish they would have had more page time.

Not a trash book by any means, just not a personal favorite.

Auggie is the 28 year old whirlwind owner of Auggie-Talk. A Teen Librarian and bibliobibuli by nature as well as a (potentially obsessive) lover of Diana Wynne Jones and Neil Gaiman. One can normally find Auggie neck deep in reading, writing, or daydreaming (sometimes all three at once).  She's also been known to drink too much caffeine and eat too many lemon flavored sweets.
Twitter
Goodreads
Instagram
Pinterest
Facebook