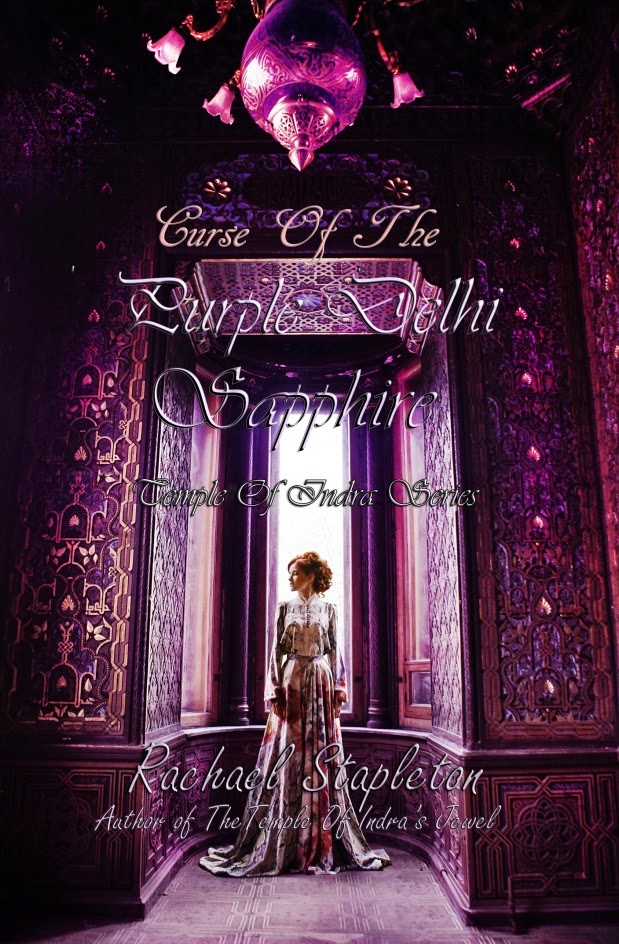 As a librarian, Sophia Marcil loved reading, especially books about ancient curses and reincarnation, but she never imagined the legend of the Purple Delhi Sapphire was true until she inherited it and was transported back to a past life where she was murdered. Now she knows that not only is reincarnation real, but so is the devil’s magic locked inside the precious gem. Just as she’s about to tell her boyfriend Cullen about it, he proposes with an engagement ring made from a piece of the very sapphire that’s cursed her. Reeling from the shock and surrounded by his family, she allows him to place it on her ring finger. As soon as it touches her skin, she feels herself being wrenched back in time.

Before she knows it, she’s wandering the hallway of an old Victorian house in the body of her great aunt. Unfortunately, her nemesis has also reincarnated in 1920—as one of her family members. Sophia struggles to locate the Purple Delhi Sapphire in time to prevent the deaths of those she loves, but she fails and returns to her present-day life, to the precise moment she left, with a deep understanding that her killer’s soul is also tied to the sapphire and every life she has, he is resurrected as someone close to her.

Her stalker ex-boyfriend Nick seems like a prime candidate this time but she’s convinced she’s a step ahead of him, thanks to a tip from a medium, she knows that if she uses the magic of the stone correctly she can trap Nick’s soul in the sapphire and save herself. But when Nick is murdered, she finds evidence that has her questioning everything she thought she knew.

Is Cullen husband material or is history doomed to repeat itself?

Available at Amazon
About the Author:

Rachel Stapleton spent her youth cultivating a vivid imagination inside the book lined walls of an old Victorian library where she consumed everything from mystery to biography, creating magical worlds, hidden elevators, and secret spiral staircases. At sixteen, she penned a column for the local newspaper and in 2006, wrote her first book featuring an adventurous librarian.

She lives in a Second Empire Victorian with her husband and two children in Ontario and enjoys writing in the comforts of aged wood and arched dormers. She is the author of The Temple of Indra’s Jewel and is currently working on a third book in the Temple of Indra series.

Curse of the Purple Delhi Sapphire is a captivating novel that crosses genres and time periods to deliver a sinister tale of love, obsession and reincarnation.

R: Music plays an important role in everyone’s life. We all have musical memories that help us identify our teen years, our twenties, and today? If I had to choose a soundtrack to fit my novel, this is what I would choose. The funny part is I can't listen to music at all when I write. So these songs are chosen at random and out of order.

Sophia Marcil would be played by Minka Kelly
Sophia’s song has to be – Once Upon a Dream by Lana Del Ray
Favorite Indulgence: Shiraz, Chocolate & Books

Cullen O’Kelly would be played by Alex-O-Loughlin
Cullen’s song has to be – Galway Girl by Steve Earle
Favorite Indulgence: Guinness, Sophia & Architecture Magazines

The Stalker I won’t reveal the identity but I will say it would be a toss-up between Polly Wants a Cracker by Nirvana and Living Room by Tegan and Sara
Favorite Indulgence: Sweet Killarney Pipe Tobacco, Whisky & Spying

Leslie would be played by Isla Fisher
Leslie’s song would be – All the Small Things by Blink 182
Favorite Indulgence: Vodka, Men & Books

Temple of Indra Series: Curse of the Purple Delhi Sapphire

Are there any other new releases on the horizon?

I have a short story—a prequel to how Sophia and Cullen met called DINNER IN THE DARK that was just released Solstice Publishing’s Valentine’s Day Anthology, The Food of Love. There are several delicious recipes in it including mine for Dill Pickle soup. http://www.amazon.com/The-Food-Love-Solstice-Publishing-ebook/dp/B00T98IXR6

What’s up next for you?

THE CREATIVELY GREEN WRITE AT HOME MOM.  http://www.creativelygreen.blogspot.ca/. Stop by and enter the #Rafflecopter contest. The tour runs until the 23rd. All stops are listed and linked on the media page of my website www.rachaelstapleton.com.

Thank you for joining me today. One final question, where can my readers purchase your book(s)?

10 E-Copies of The Temple of Indra’s Jewel. (The first book in the series.)