Review: "Once Upon a Time Machine"

Today I've got a review of a bit of a different color.

When I received this book for review I wasn't aware that it was a comic. At first I was wary, but it was actually very entertaining and spectacularly well done. 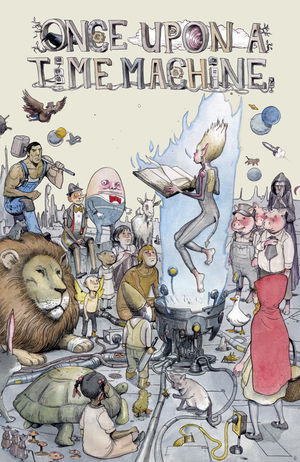 Synopsis: Fairy tales have fueled our dreams and fired our imaginations for centuries. Step inside a time machine built by a collection of today’s finest storytellers, and enter a range of futures where familiar tales are reimagined in an astonishing variety of styles. Editors Andrew Carl and Chris Stevens bring you the next wave of leading writers and illustrators working alongside superstar creators like Farel Dalrymple (Pop Gun War), Ryan Ottley (Invincible), Khoi Pham (Daredevil), and Brandon Graham (King City) to deliver a reading experience that will delight generations young and old.

But they did! I zoomed through the 400+ pages of AMAZING illustrations and FANTASTIC fable twists. It took a creative bunch of people to come up with such different perspectives on such old fables.

I can't tell you how impressed I was with the presentation of these stories. Just as the synopsis stated this comic is for both young and old. There is nothing particularly disturbing drawn so parents should have no problem with youngins picking it up, but there's enough meat in the story that older readers will find enjoyment just as readily.

Every fable rewritten is set to take place in the future. Very futuristic settings, very tremendously imaginative landscapes and backgrounds for the stories that most of us already know by heart. It gives you an idea of how strong a fable/legend is, how long lasting, how powerful it is even in its age. These are stories that are known throughout the world and ones that will probably not soon be forgotten. "Once Upon a Time Machine" seems to be a guesstimate of just how strong and timeless these stories really are.

While I was extremely pleased with this comic there were a few stories that I found to be rather on the boring side, but that's only because they weren't my setting preference. That doesn't mean that another person won't LOVE the stories I didn't enjoy as much. I know almost certainly that my younger brother would gobble up the stories that I didn't prefer.  "Once Upon a Time Machine" has something for everyone.

I do very much recommend that you snatch this up when it becomes available in October.
PRE ORDERAmazon: $13.99

I hope all of you have a fantastic Thursday! See you tomorrow with another FEATURED FRIDAY!